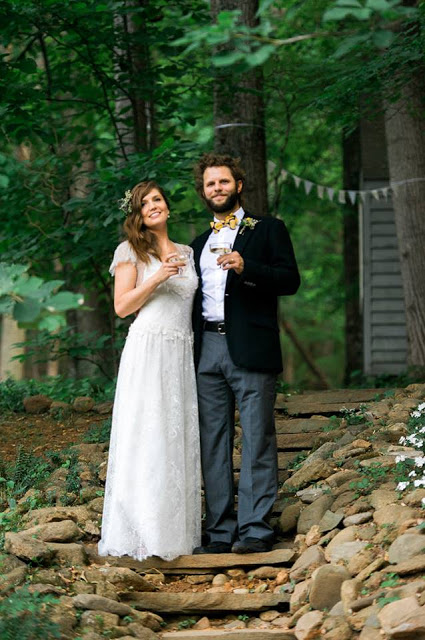 When Amanda first met Micah, she didn’t like him very much. Amanda had been working at the Blue Light Grill on the Downtown Mall in Charlottesville, when Micah started working there. Amanda said that Micah changed a lot when he came to the Blue Light Grill, and at first she didn’t like the changes or Micah, but she soon grew to admire him and his work ethic, realizing that he was a good guy.

They began flirting, which soon led to dating, and slowly her love for him grew strong. Amanda told a story of a big date Micah and her went on, where they visited three different watering holes, went on a hike, and then ended the day at McGrady’s Irish Pub, where they would later have their wedding reception. She decided that he was the smartest and sweetest guy she knew, which made her excited and a bit scared.

Amanda didn’t see the proposal coming. She knew Micah had planned a romantic date (of which she told a girlfriend about, who guessed Micah might propose), but it just wasn’t on Amanda’s radar.

The day of the special and romantic date arrived. Amanda and Micah had a tasting at Clifton Inn and then were having a nightcap. Out of nowhere, Micah dropped down on one knee and pulled out an engagement ring. Amanda was so stunned that she couldn’t process what was happening right away. When Micah saw Amanda’s face, he actually stood back up to make sure Amanda was alright and that nothing was wrong. Once Amanda finally registered what was happening, she began jumping around and asking if what was happening was real; she was so incredibly and unbelievably happy. Earlier, Micah had stashed a bottle of champagne outside, and once Amanda said yes he retrieved the bottle and he and Amanda toasted to their new life together.

When Amanda was asked how she found THE dress, she answered that she was looking for something lacy and Gatsby-esque. Our owner, Susan, then brought a particular dress from the Richmond store for Amanda to try. The dress had a separate lace overlay, and when she first caught her reflection in the mirror after putting the dress on, her first and immediate thought was, ‘Get this off of me.’ After a moment, Susan realized they had actually put the lace overlay on backwards, so they fixed it, and that’s when Amanda decided that the dress was perfect.

Amanda wanted her and Micah’s wedding to be a very relaxed and fun event, and she cleverly thought of a great way to achieve that in her wedding. The ceremony was held in her parents’ home. The guests were given burlap sacks filled with ponchos, koozies for drinks, and a fleece blanket with a lemon on it because of Micah’s last name, LeMon. As a replacement of chairs, the guests spread their blankets and sat on them during the ceremony. Guests hooted and hollered and whooped as Amanda walked down the aisle. The ceremony was followed by a reception at McGrady’s Irish Pub, as visited on their “big date.” Amanda said that the whole event was “pinch-yourself perfect.”

(We loved working with Amanda; she was very fun and easy to work with and knew what she was looking for when she walked into our store. Stay fun Amanda, and congratulations on your beautiful wedding, as well as your beautiful dress!)